Great Uncle Joe delivered the thunderbolt from the flagstones of Fair Hill in the heart of north-central Connecticut. 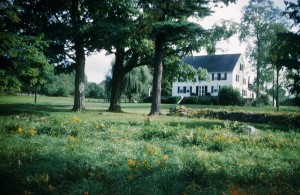 The guests would be leaving after lunch, which Maria was preparing in the kitchen. Their belongings, including toys, were in the car, except for items left at the bottom of the wishing well. The sprinkler, no longer the main attraction of a homemade water park, was a boring old sprinkler again.

“What’s the hold-up, Maria!” Joe called out, while stroking his dog, who had brought him a forgotten kite.

Prior to impact, he would have offered his audience of two their favorite beverages: a cold Cremo for brother Walter and lemonade for sister-in-law Virginia.

“We’re having Ham à la King,” he informed them with a wink.

The cat, which had been wrestling in the grass with a stick beyond the reach of the sprinkler, now went to say her goodbyes to the children. Walter’s transistor radio crackled in the background with avuncular play-by-play from Pittsburgh’s Forbes Field.

“Yankee go home!” cracked Joe after a play at the plate, trying again to generate some heat of sibling rivalry with Walter, who rooted for the team of his adopted city, the Pirates.

During the seventh-inning stretch, Joe announced, as if casually, “This property is ripe for development.”

“According to a neighbor, the place could be turned into a golf course.”

“You are thinking of selling?! Fair Hill is sacrosanct!”

“Never say never. Who can’t picture a ball on its long descent toward the wishing well?” 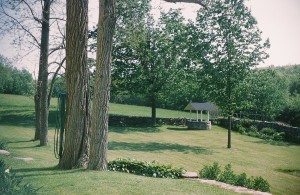 “What does Maria think?” asked Virginia.

“Maria would say the place should be left untouched. I’m not ready to rush into anything. The local children get the most out of it. Plenty of fresh air here!”

“Our children are playing in the basement,” Virginia remarked, while defending the tomato aspic and rhubarb pie from flies. As if on cue, Maria came outside, clapped platter-sized domes of mosquito netting over the food, winked at Virginia and disappeared back into the kitchen.

No clashing of cymbals or fanfare of horn and drum accompanied this announcement, as the high school marching band had finished practice for the day.

“We feel Nancy could be very happy here,” he continued. “With us. Full time.”

Virginia and Walter were not ones to fly off the handle. Walter gazed into his glass of Cremo on the chrome-edged table, until Virginia, leaning forward in her glider, took a deep draught. To Maria’s way of thinking, Joe explained, Walter and Virginia had Kay, their first-born, and therefore could part with Nancy, the younger daughter.

“With Nancy around, we would never think of selling. There would be no development, no golf course. Things would stay as they are.”

Virginia, who sensed that Joe’s sales pitch was not over, began to distrust her senses upon seeing the house reflected in Jell-O.

Walter, facing the wishing well, thought to himself: “This rural air is healthier than Pittsburgh’s – no arguing with that. Bills would be smaller. The girls would not be in competition. There would be more trips to Forbes Field.”

“Joe,” Virginia began, “your heart is in the right place.”

“Think of the coming bills,” Joe continued. “Clothing, ice cream, school books, piano lessons, etc. Two sets of cavities, two prom dresses, two college degrees, etc. Walter would not have to chaperone Nancy to singing engagements all over the ‘Burgh. Here, all of New York City would be our oyster!”

Continuing his reverie, Walter mused silently: “Golf has not been my game, but it could be, given the right circumstances. With my new clubs in the trunk of the Edsel, I would scour Western Pennsylvania for every last golf course, stopping on a whim for coffee in a greasy spoon or to see a small-town theatrical. From local papers, I would clip golf specials, which I would follow up in person like any sensible man, kicking autumn leaves before me. Before the first snow, I would turn south for the Carolinas, Pompano Beach and even Havana.”

About now, Walter’s shin, the one closest to the tips of Virginia’s Oxfords, would have experienced a sharp pain, which may or may not have achieved its intended effect of dissolving a layer or two of his reverie.

“Joe!” Maria called from the kitchen.

Once the screen door slammed behind Joe, Virginia, who had read her husband’s mind, exclaimed, ““Walter! How could you?!”

While Walter weighed his answer, Joe burst from the house bearing the main dish.

There it stood on the table in all its glory, a Lincoln Log structure of franks built up around a roast like a fortress. Pimiento-stuffed green olives speared with toothpicks battened the walls and served as decoration along the parapet. Beads of tap water on the Iceberg Wedge Salad withstood for the time being the heat of the Stockade Roast and the sun.

“A roast for the adults, dogs for the kids!” laughed Joe, while straightening broccoli trees embedded in mashed potatoes piled like New England snow drifts (or Western PA ones, for that matter). “Call them. They’ll want to see this.”

“An experiment,” trilled Maria, flushed from the oven and nerves. 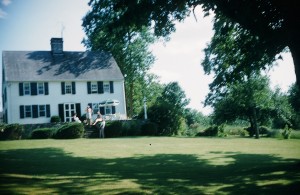 Virginia, who disapproved of the radio during meals, switched off the ball game. Great Uncle Joe stood over the Stockade Roast, his eye following the line of the carving knife to define his approach to cutting portions.

“Seems a shame to ruin it.”