The charges against H.:

A trial before a jury of peers is a hellish prospect to H., and he dreads a bench trial decided by a district judge, or courtier, who won’t hear the subtleties of his case. By pleading guilty, he saves time, trouble and San Diego taxpayer money. The degree of cruelty of his sentence will hang on extenuating circumstances. He requests a change of venue, choosing his birthplace for the symmetry of going out where he came in—in the Fifth Judicial District of Pennsylvania in the County of Allegheny.

The Court in downtown Pittsburgh, dedicated in 1888, is one of the 19th century’s most acclaimed buildings. Architect Henry Hobson Richardson’s Romanesque edifice resembles a forbidding castle. H. believes his case deserves a landmark setting, whatever the prosecution might allege. The Court used to have a jail connected to it by a “bridge of sighs” over Ross Street; the traditional, practical, ominous pairing is to H. a presumption of guilt until proven innocent. 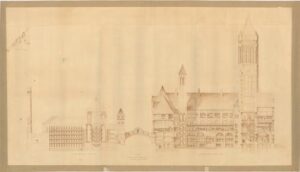 After lingering on Grant Street during a pep talk with himself, H. proposes a motto for the Court’s arched doorway.

The German is a bow to his immigrant ancestors. Before entering, H. inscribes a translation for a make-believe brass plate beside the door:

You are arrested, certainly, but that should not hinder you from fulfilling your job. The Overseer

H. wears black to show he understands the gravity of his situation. After sheriff’s deputies at the security checkpoint confiscate his bared bodkin and divot repair tool, two ununiformed civil servants, F. and W. according to their official steel badges, approach him. They wear smiles.

Sir, about your sentencing statement…You really want to go through with it? Our halls echo with the cries of people who did not drop their cases. ‘What possessed me? Is it too late to get out of it? O, to end it all!’ This way to the Tower, Sir.

We have a responsibility to inform the public of its options–without crossing the line of providing legal advice. Follow us, Sir.

A red velvet cord like in a theater prevents admittance to the Tower. One civil servant unlatches a brass hook, while the other signals H. to proceed first.

Watch your step, the ascent is not for the faint-hearted. 318+ feet up to a view that was breathtaking until the robber baron Henry Frick built one of his temples to the almighty dollar across the street, which also foreshortened the view of our facade. You’ll have to use your imagination to see the North Side, the stomping grounds of your paternal forebearers, or, as they knew it, independent Allegheny City before Pittsburgh annexed it in 1907.

H. is not surprised that his background has been checked.

The Tower was intended as a repository. Most paper files have been scanned, but some were interred as originally planned. Your family’s cases may be around in their original state.

H. is unaware of family cases.

Pardon the state of the filing system, the absence of light and my sleeping colleagues. Yes, some of us live here. Stay near my candle. It’s our last one.

By the time the small party reaches the top, H. is out of breath.

Frick’s skyscraper and later ones ruin our panorama, otherwise we could see the area around the Allegheny Social Club, where your paternal grandfather stayed upon arrival from Germany. Later, your father earned money by selling rabbits to North Side restaurants. Later, one of your three brothers was born in Allegheny General Hospital. So, there you are, if you intend to raise family ghosts. Closer to ground zero, note the office workers across the street. The county’s electronic-chip program enables them to carry their implanted files with them. Again, watch your step. If you were to jump or fall…well, we don’t want any trouble.

During the descent, H. drops unmarked bills in small denominations. His minders fall to their knees for them. He exits the dark tower alone.

The Grand Lobby contains murals by one Vincent Nesbert. After minutes pass in futile contemplation of Justice, H. is moved enough by Industry to detain a passing civil servant for questioning. Under cross-examination, the witness is unable to testify credibly about the merits of Industry or Justice. 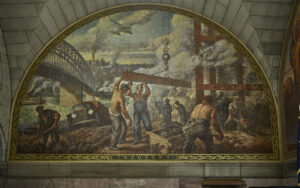 Attorneys of all persuasions clog the Grand Lobby, avoiding self-represented litigants. Two of the latter, A. and Z., begin a one-sided conversation with H. about their dozen lawsuits, which they are pursuing individually and jointly. They are fighting with their home owners association over landscaping, a case which, they admit without shame, could have been settled with a bag of grass seed, according to an early courtier during proceedings which have lasted for a decade and are ongoing. For three years, the pair has contested a misdemeanor traffic offense for the sake of “principle.” They lost and promptly appealed. They are fending off creditors and have restraining orders issued against them. Before adjourning the consultation (they aren’t done talking, rather they are late for a hearing), the disputants complain about being declared vexatious litigants, which means they are barred from filing new complaints. To himself, H. declares:

He slaps, figuratively speaking, another piece of wisdom on the nearest impost block.

If I paint all the judges side by side on a canvas and you defend yourself before the canvas, you will have more success here than in a real court. The Painter

A. and Z. return. Their request for continuance has been granted. Their portable scanner is already turned on.

H. is being addressed by a ghoulish apparition who had appeared to be sleeping beside a brass lamp. He assumes the homeless use the Court like in San Diego, but the steel badge identifies him/her/them as managing civil servant C. A black robe and blonde wig perform double duty as blanket and pillow. Flesh visible beneath the threadbare robe is comparable to specimens in the nearby morgue.

Sentencing statements can be submitted electronically, so I can have one of my staff show you out…They pooled money to purchase this robe and wig. If I find out that someone didn’t contribute, slow death by bureaucracy will follow. Most are malleable, an admission that they are replaceable. The rest, thinking they know better than us managers, are the enemy, more dangerous than the public…If you insist on staying a while, smile. By being upbeat, you may avoid the worst. Would you like to see a menu of punishments? Mental beatings don’t break the skin. We in Operations use them too. One of my career highlights was to order a clerk to the office during the COVID-19 pandemic when he could have worked from home. It gets better: He trembled at the thought of infecting his disabled, self-isolated wife.

On the next landing sits a C. clone. H. peers up the limestone. The Court is marshaling its forces. Additional C.s stand in formation on each landing. A militaristic whistle breaks the silence. As one, the managers place crowns on their heads. C.’s is a rusty steel bauble, a suitably vile accessory to her wig. She is rejuvenated, the smile more malevolent.

Contrarians approach at their own risk. They are routinely kicked down the stairs.