Electronic literature before its time

“…to make utterly fantastic plans for the edition-de-luxe: it [Mortmere]was to be illustrated, we said, with real oil paintings, brasses, carvings in ivory or wood; fireworks would explode to emphasize important points in the narrative; a tiny gramophone sewn into the cover would accompany the descriptive passages with emotional airs; all the dialogue would be actually spoken; the different pages would smell appropriately, according to their subject-matter, of grave-clothes, manure, delicious food, burning hair, chloroform or expensive scent. All copies would be distributed free. Our friends would find, attached to the last page, a pocket containing banknotes and jewels; our enemies, on reaching the end of the book, would be shot dead by a revolver concealed in the binding.”

from “Lions and Shadows: An Education in the Twenties” (1938) by Christopher Isherwood

“For anyone who knew the perfection of Martin’s rendering of the tones of West Galway, of the gestures, the pauses, that give the life of a story, the words lying dead on the page are only a pain. Perhaps, someday, portable and bindable phonography will be as much a part of a book as its pictures are.”

“Thanks for sharing. Despite the postponement, the artist list is still determined by our guest curator and is finalized.”

“Thank you for submitting a proposal for a 10-minute provocation for the Diverting Walking Section of Walking’s New Movements.

We had an overwhelming amount of proposals and it has been an exciting but also a difficult process selecting for this year’s conference (2019) because each and every proposal was very interesting indeed.

We regret we can’t invite you to present a provocation this year, but we did really appreciate the time you took to write to us and your ideas for doing this via Skype.

Because we could not take all provocations our selection process looked at those who gave detailed proposals directly in line with the call’s theme, who will be present to share the material with us in Plymouth, and we also selected a range of provocations to avoid the duplication of ideas – to give a variety of provocations a space. This is not a rejection letter based upon your concepts and project, rather we worked through a selection process that needed to consider the amount of provocations we could reasonably host across a weekend.”

A board member contacted New Monuments about our Agua Caliente Gallery, whose photos are from a 1930 souvenir program which he had sought for three years. His club occupies the original Agua Caliente site, including the same golf course. Upon learning that the program is in storage at San Diego Public Library, he visited San Diego the very next day in order to scan the program himself. He was thrilled to have it in time for the club’s hosting of the 2018 Mexican Open a few weeks later.

He could have had his prized possession sooner. In 2012, our club emailed his club about the program, but got no response.

The club has scored a major acquisition: Charlie Sifford’s autograph. Mr. Sifford, who did not enjoy the kind of celebrity he deserved, might smile ruefully at the reason. The recipient of the autograph gave it away.

We found his John Hancock inside Just Let Me Play: The Story of Charlie Sifford, the First Black PGA Golfer (British American Publishing, 1992; written with James Gullo). It’s in a copy borrowed from a public library. The book was donated by a certain Peter Coors. 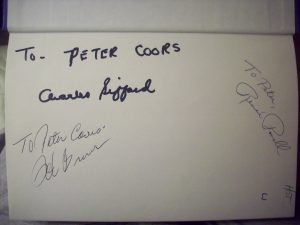 Thanks, Peter Coors, even if you are the guy who makes Coors Beer – and bonus points for autographs of Pete Brown, the first African-American PGA Tour winner, and Reneé Powell, the 2nd African-American woman on the LPGA Tour and in the first group of female members of the Royal & Ancient Golf Club of Scotland.

Although the book is repetitive at times and omits any mention of his caddie, who would have been an eye-witness to the many affronts endured by Mr. Sifford, Just Let Me Play is a valuable contribution to golf and American history.

The book has to be returned soon, but technology enables us to keep the autograph, which in honor of Mr. Sifford will be added to our collection of prized possessions in the Trophy Room.

Diamond in the Rough 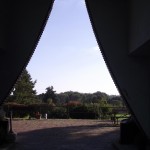 You would not look twice at the building depicted on the front of the South Park Municipal Golf Course (PA) scorecard. As presented, it looks like a maintenance or storage facility. In fact, it is the clubhouse and an historic landmark (it bears a plaque of the Pittsburgh History & Landmarks Foundation). 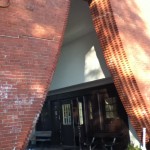 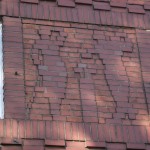 …since then, dapper, angular golfers have played in panels set between the second-story windows of the long, narrow, two-story brick building. Truly wonderful is the two-story opening in the center of the building – a dramatic, geometric gesture as well as a ceremonial triumphal arch evoking an ancient civilization, Hornbostel’s source was a temple in Yucatan that he had seen in 1907; its creative adaptation in Pittsburgh recalls Titus de Bobula’s 1905 exhortation that American architects should seek inspiration in “our own archeological excavations of Yucatan and Mexico.”

“The United Golf Association, also known by its members and fans as the Chitlin Circuit, held some events at South Park,” writes the Old Man. “If my story idea about the UGA ever gets off the drawing board, it won’t leave out the clubhouse and its ‘dapper, angular golfers.’”

Elizabeth LeCompte: When I choose texts, they’re random in a way. I feel I could use any text. That was something that started very early with Spalding. I could pick up anything in this room and make a piece that’s just as complete as L.S.D. I could take three props here: the printing on the back of that picture, this book, and whatever’s in this pile of papers, and make something that would mean as much, no more nor less, than what I’ve constructed in the performance space downstairs.

Spalding Gray: It comes from living in a space and having it your clubhouse. I mean, just look around this room and think of the possibilities.

from “Breaking the Rules: The Wooster Group” (1986) by David Savran 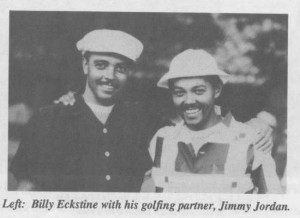 A: I’m a Negro performer with a Jewish name.

“As I came into Newmarket before dark, but after the closing of shops, the long wide street and a strange breed of men standing or slowly walking about on its pavements made me feel that scarcely after a dozen reincarnations should I enter Newmarket and be at home. The man who discovered that we are ‘all God’s creatures” had an uncanny eye for resemblance, and I often doubt the use of the discovery, without disputing its accuracy. Everyone was talking of horses except those who preferred lords and professional golfers. I saw some caddies industriously swallowing temperance hot drinks instead of beer, in the hope of earning as much as James Braid at some distant time. As for the horsy men, they seemed to understand lords as well as horses, so well as to illustrate the saying, “To know all is to pardon all”: nay! To go beyond that, to admire all, and to believe that men are more or less worthy as they are more or less lords. One of them was imitating the bad language of Lord —-, and it was admitted perfect; but I can quite believe that to be a lord is very different from being able to imitate one after a glass of ale.”

“The air was silent and still, the road was empty. The birds coming home to the quiet earth seemed visitors from another world. They seemed to bring something out of the sky down to this world, and the house and garden where I stayed at last were full of this something. I heard rooks among the tall beeches of just such a house as I knew I ought to have been able to imagine, with the help of the long white road and the gentle hills, the tall trees, the rooks, and the evening. There were flowers and lawns, beeches and sycamores, belonging to three centuries, perhaps more, and stately but plain red brick of the same date, and likely to endure for a yet longer period, if not by its own soundness, then by its hold upon the fantasy of men who build nothing like it.”

“It was now clear to Father Urban that this was not to be just another round of golf, that the Bishop wished to see done what he could not do himself, and that he had chosen young Father Feld to be the weapon of his will, his champion. Father Urban’s defeat was not a necessary part of the Bishop’s larger plan of conquest, but Father Urban could understand its appeal – to create an omen, as it were, and then to act in accord with it. In Father Urban’s mind, informed as it was by a good deal of solid reading, the match between him and Father Feld took on the appearance of a judicial duel. Victory for Father Urban in the field, however, would not mean victory for his cause. That was the hell of it. Father Urban had read of many ordeals by combat (in the dim past even religious men, unfortunately, had sometimes appealed to the God of Battles for justice), but he doubted that history would reveal a parallel case. He pushed on, with his driver drawn, to the second tee.”

If you enjoy a thrilling wood roller coaster, Mt. Woodson Golf Club in Ramona CA has the cart path for you.

The Old Man applied for admission to an artist residency program in order to work on a course set at Sunnylands in Rancho Mirage CA. Here is his statement of proposed work during the residency. The winners, who will enjoy six weeks of desert heat during toasty July-August, will be announced by the end of May. In the meantime, dear members, knock on wood.

Update: The presidential subject will not be foreign policy, it will be Ford’s pardon of Nixon on September 8, 1974.

“…At her first big golf tournament there was a row that nearly reached the newspapers – a suggestion that she had moved her ball from a bad lie in the semi-final round. The thing approached the proportions of a scandal – then died away. A caddy retracted his statement, and the only other witness admitted that he might have been mistaken. The incident and the name had remained together in my mind.

“Jordan Baker instinctively avoided clever, shrewd men, and now I saw that this was because she felt safer on a plane where any divergence from a code would be thought impossible. She was incurably dishonest. She wasn’t able to endure being at a disadvantage and, given this unwillingness, I suppose she had begun dealing in subterfuges when she was very young in order to keep that cool, insolent smile turned to the world and yet satisfy the demands of her hard, jaunty body.”

New Monuments’ self-appointed ball collector sells most of his quarry. The rest are for his own use. Prepared over a simple fire and seasoned to his taste, he compares them to twice-baked potatoes. His golf game is a mystery. No score cards exist. Look for an elusive figure scrambling to play a few shots behind or in front of your group or cutting loose by the light of the moon with jimmy-rigged night-vision equipment. The late Mango, former New Monuments watch dog, used to keep him company on cold nights in the warm sand of our bunkers.