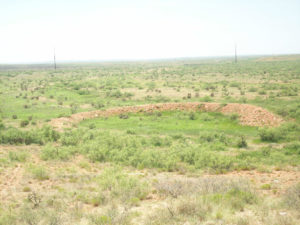 Palenque Falls Country Club was a routine job until it wasn’t. Two agent provocateurs within Smitty Associates, radicalized by climate change, disrupted the firm’s renovation of Palenque Falls. We called ourselves the Dissociates.

Suz and I, undergrads in landscape architecture, interned that rocky summer with golf course architects Smitty Associates. The Associates, who had a maverick reputation by the game’s conservative standards, enabled us to acquire “real world” knowledge of the office tools of the trade, and we got our hands dirty with the local contractors and sub-contractors. But our preferred fields of employment were horticulture, city planning and cemetery maintenance. Our hearts were not in Palenque Falls, so one hot day, Suz and I persuaded (using cold-beverage emoluments) some of the construction and irrigation crews to play “practical jokes.” At first, we and our recruits were indulged as mildly amusing smart alecks, such as the time Suz and I slipped school books onto the shelves of the club’s St. Andrew’s Library:

Man’s Discovery of His Past: Literacy Landmarks in Archaeology (1962), Heizer (ed.)
The Modern Technique of Rock Blasting (1967), Langefors and Kihlström
Design and Construction of Asphalt Pavements (1958), Martin and Wallace
Trap Rock Minerals of New Jersey (1960), Mason

Not many books had to be re-shelved (Suz and I checked throughout the week of the “exam”), but guess if they were ours or the potboilers stamped with the club’s logo? I doubt the missing stamp made the difference. Incidentally, the membership favored traditional plots (no surprise given the forward march of their pastime) and the logo was either a vaquero/cowboy and steer or (no lie) St. George and a dragon.

Next we pounced on the jukebox in the Pebble Beach Bar. Bing Crosby and Yanni joined the discarded remains of burgers and fries; then, since our generation’s music would have blown the roof off Palenque Falls, we compromised by promoting a past generation, rebel voices from 1960s and 70s counterculture:

After a rattler crashed the jukebox party by coiling around Alice Cooper’s Killer for a siesta, the Dissociates moved from juicing the jukebox to tinkering with irrigation pipes and blistering the club in social media, including the corkboard by the reception desk. The fairways curving through the landscape, and the greens dotting it, lost their luster. Niagara Falls, the patriot-themed 4th hole, was turned off in the middle of the night. By morning, its exposed boulders could have passed for the tomb of Lazarus. A Dissociate drew a cartoon depicting angels and dancing graces in scenes of desertification and pinned it beside “best offer” notices for a preowned “Eliminator” and a stuffed hawk. The clubhouse itself, the members’ home away from home, was summed up in a poetic Yelp review:

A garden of cast-off bricks…an abandoned chair rather poignant suggesting the transitoriness of time and the universe and also you can get a better view of the scaffolding in the roof.

While socializing and golf continued where circumstances allowed, fewer crisp greens on the course than on chilled salad plates caused the membership to fume. So, with some reluctance (he had patience and a sense of humor), Smitty, project manager and son of the Associates founder, let it be known to the Dissociates:

Straighten up and fly right.

Smitty said it from the bandstand in the temporarily operative Pebble Beach Dance Hall (the Bar became the Dance Hall for weddings, quinceanarias and reunions). Indomitable Suz, who as an outlier in the male-dominated golf industry was used to playing defense, rose to pitch an ambitious business proposal: the dissolution of every eco-unfriendly golf course in existence:

A posse of Palenque Falls-ites that had drifted in froze in its tracks. The fellow who had won a recent closest-to-the-flag contest traded cold looks with a detachment of laborers which straddled folding chairs turned backward, and his face turned scarlet at the spectacle of their menacing attire: vaquero hats and black biker boots with square tips. (I was wearing khaki shorts and a collared, sweat-wicking cream golf shirt.) Yes, some of our chums on the work crews were not joking anymore; they had become full-blown Dissociates. To lighten the mood, someone turned on the disco ball. To my eye, its wobbly rotation bespoke a dissolute past and a coming storm.

Where is the profit?

Before the golden question could be answered, the disco ball indeed fell with a spectacular crash, breaking up the meeting. I blamed the fall on the tension in the room. The scattered shards multiplied reflections of unamused faces.

That restless night, I studied drone footage of the project, with half a mind to delete evidence incriminating the Dissociates, until another development attracted my attention. Over the course of a month, August 3 to September 1 to be exact, an enormous shape appeared in a distant corner of club property, a spiral! Although the drone flight paths gave an incomplete picture, they gave enough. A lakebed, or playa, was filled with water, then heavy equipment, trucks and bulldozers not authorized to be there, did their thing. The trucks dropped loads of red rubble, the bulldozers pushed it into position. Both raised dust plumes, red scrims carried off by the wind. Four ant-like figures wearing safety helmets directed the operation of building within dispersal. Judging by their periodic huddles, they were the leaders and as methodical as ants are said to be, without so much as the smoke signals of a Marlboro break. One could be observed moving around a filmmaker’s or geologist’s tripod. One was in charge of laborers. The other two shaped the structure – let’s call it a ramp. My aerial witnessing was visceral. I felt the imprint of tire tracks and mud cracks. As the ground reabsorbed the water (evaporation sped by hot weather), the ramp settled palpably, feigning permanence. The hulks churned up a precarious catwalk, guided by stakes placed in a curving pattern. When one white steel beast keeled over, a yellow one picked it up. Their unsettling ruckus (the drone tracked sound like a blood hound) shook the earth. A shaper measured the ramp’s slopes with more stakes. From on high, the competed assemblage resembled a raised teardrop on the land.

Suz and I were staying at Motel Palenque Falls, an idiosyncratic wreck chosen by her after she felt the gaze of a baby alligator in the lobby pond. Over breakfast, which we supposed was our last meal on this trail ride, I told Suz about my discovery. Her focus on the menu was illusory. She later phoned as she hiked in haste toward the Antwork.

Suz, are you all right? Today’s sun would make anyone’s head swim. 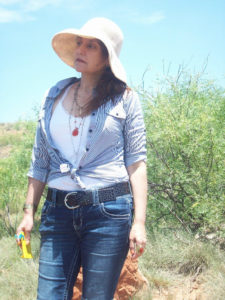 Here, the signal was lost, so I sprang in a pickup and sped straight to the teardrop. Moments later, my brakes spread a cloud of rust dust over the foot of it. Suz, singing America’s Horse with No Name, another jukebox selection, removed her earbuds with a smile.

Yes, Suz was the creator of the ramp/teardrop, the lead Ant during weekends, days off, nights, aided by her team of all-star Dissociates. After a solemn inspection tour, we jolted along mixed-grass plains, red rock and blue sky toward our temporary homes, the country club and the motel. Traces of activity at the site were gone and the tire tracks leading to and from it would follow the same path to oblivion. If noticed at all (it fit, more or less, into the landscape), the “nonsite,” so to speak, would be a riddle which Suz could also recreate on a small scale elsewhere. I would have trusted the whole matter to blow over if she had not stopped the music to reflect:

I could tell them it’s a monument to a bunker…