1. Kidnapped. One morning over coffee, I stumbled on a video on the worldwide web showing a familiar little chap bashing around a golf ball. My twin and I had been separated forcibly in infancy, so I flew to Breakfast Island for a reunion. An unnerving descent through the gray clouds of the Marmalade Hills took the biscuit, but I knew by my watch, and by a feeling of atavistic exaltation, that my arrival coincided with the commencement of a sacred ritual: Breakfast was being served. 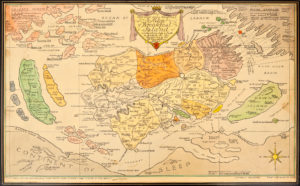 Why look up the bro bloke? Curiosity about the vaunted bonds of blood and about the circumstances of toddler John’s abduction. He had wound up with a foster family, the Clubspeeds, who raised him in a not ignoble environment during the reign of the 2nd Elizabeth. Mum’s specialty was Weetabix and Da was a kippers man (see video for Mum and Da). John entertained, it transpired, great expectations for himself, even though he looked the worse for wear and was well into middle age. Indeed his expectations mirrored disconcertingly my own fantasies about dear old Breakfast Island. Very particular about his “tuck” (Breakfast Islandese for breakfast), he was anxious to take me on a grand walking tour. He described the excursion as his next step toward “earning a knighthood,” a well-known cause of indigestion on Breakfast Island.

Over fry-up after fry-up, John and I followed clues leading to and from his disappearance, guided by Kodachrome slides of photographs taken by our birth Mom (her eyepiece of choice was a Kodak Retina Reflex IIIC), as well as letters, day books, witnesses (cooperative and uncooperative), oral histories, &c. Let the record reflect that the Kodachrome Collection is hereby bequeathed to the Breakfast City University Library, unless its proper home is deemed to be the Breakfast City Constabulary. One never knows when or what new evidence may turn up.

2. By rail and suspicious van. We picked up the trail (after a quick crumpet) on a train bound for Burnt Toast Bay, the scene of the original crime. 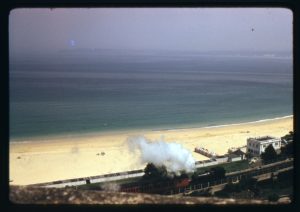 While Dad, a U.S. Air Force doctor, was on duty in Breakfast City, where the Water River meanders through the island’s universally acclaimed brainery, a posh cluster of et-in-arcadia-ego edifices you won’t stumble across on every street corner, Mom, John and I had entrained for the Bread County coast, where in broad daylight on a public beach John, as he recounted sheepishly, crawled into a picnic hamper for a nosh and was savoring the pleasures of his mini Breakfast Island, until the hamper was filched boorishly. Nearby sea and sand worshippers claimed afterward to have noticed nothing. If Burnt Toast Bay had known a similar breach of etiquette, its reliably breaking waves and enterprising seagulls were not telling. John trembled in the present at the memory of being flung into a suspicious van, the kind without windows in the back which generally are owned by a plumber or electrician but which can also, alack, belong to…malefactors. He also remembered screeching tyres as his captor/s scarpered through summer traffic. Although the knight-in-training failed for the first time to finish a meal, he recovered, right as rain after a few kips on a full stomach. His birth mother and father became misty reflections. He settled into a new existence.

3. Of whodunnits, the queen and collateral damage. Rather than notify the coppers, Mom handled the case on her own. She would solve it with her able assistants, her beloved murder mysteries, as she explained to Dad from inside one of the red phone booths dotting our temporarily adopted land. She associated the booths with the cloak and the dagger. “So,” Dad, a homebody absorbing the blow over tea, replied, “A case of foul play?” Mom refused to speculate before an investigation had begun properly. We boarded the next train for Breakfast City, where she could sensibly await a ransom demand. At this point in the tale, John showed that genetics don’t lie: Without pomp or circumstance, like Mom when she chose to risk life and limb on whodunnits, John decided to make his “grand walking tour” a vicarious one. We would follow Mom’s Kodachrome and paper trail without leaving his kitchen. Such a course would not, he calculated, jeopardize his knighthood either. 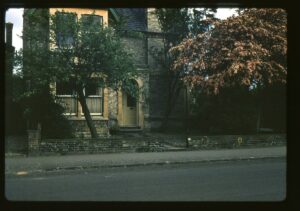 In the interest of full disclosure, the reader ought to be apprised of the fact that John resided in the very house rented by our birth parents, a point of honor in his book. “Born, raised and fattened in the reign of the 2nd Elizabeth,” he explained, “I know from the tabloids that the queen believes in family.” Indeed the foregoing confessions were made at a dining table in “HQ” (his expression). John had turned the place into a bed-and-breakfast.

I asked John about the golf video. The bystanders, he answered with clinical calm, were not smiling anymore. Every last one had come to a violent end. “Breakfast Island seems impossibly small for so much carnage,” John related over a plate of fried halibut, “but Mum and Da don’t dwell on the past.” The steely couple “got on with it,” even where collateral damage resulted. In mitigation, according to John, they contributed beyond their means (or what was known of their means) to the annual golf links food-for-charity fundraiser. John believed they were not involved in the hamper caper; they had acquired him legitimately. To me, the Clubspeeds were persons of interest.

4. In the great kitchen of a great house. John beat me to Mom’s stash of theatre playbills. He was drawn to the advertisements.

Supper is served ONE HOUR before all evening theatre performances.

The adverts did not captivate him for long. He was soon ready to discard every playbill but one. Although the keeper had not stirred a dormant passion for theatre, nor revealed a clue to our great mystery, it had one great advantage over its rivals: The drama was set in a great (sic) kitchen in a great (sic) house. So John renewed his lapsed library privileges and read the play, which turned out to be all talk and no comestibles. I caught him at the stove before he could torch the disgraced playbill. 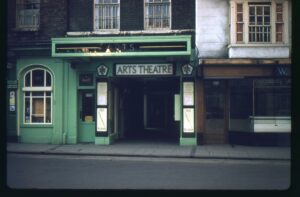 The packrat in me wanted to save the playbills. John argued they were an embarrassment. I counterargued they deserved to be scanned. “That’s your lookout,” John replied. “Afterward, shred them.” He regarded the destruction of playwrighting incompetence as a civic duty. After adjourning for a cuppa, I returned to the attack. The playbills were evidence, I told him. Some Sherlock materializing down the road could use them to crack the case of his abduction. This angle elicited a palpable waver, but since it relied on a contingency, he did not fold. I pulled out my smoking gun: Several actors and actresses in the lists of characters had become Sirs and Dames. Even a playwright or two. Insincerely, John applauded my defense of the playbills. 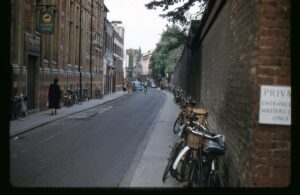 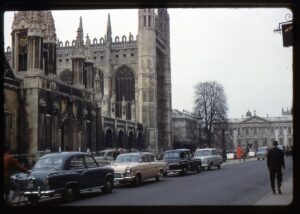 7. Its old walls are the haunt of a special race of Bryophila muralis. 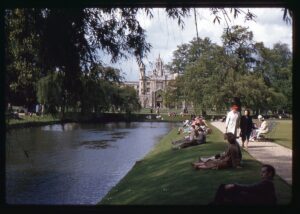