Once a regular visitor to your community as a cub reporter for the Herald, I had a peculiar experience there which I have kept to myself until now. I relate the illuminating circumstances in your pages because your readers, local people, may possess a morbid curiosity. The trouble started with the Molyneaux map. Yes, L. G.’s infernal Sewickley Heights and Vicinity with its (naively rendered) drawings of the “gentry” hunting and shooting in the company of well-bred horses and hounds.

Thanks to the miracle of 1937 cartography, there I am, walking on Allegheny Country Club’s golf course barefoot, unannounced, unaccompanied by a member and without a debutante on my arm, gazing askance at the adjoining estates. The Gilded Age is not over! Their evocative names are deceptively welcoming: Elm Cottage, Fair Acres, Fairway, Farm Hill, Goodwood, Highlawn, Lane’s End, Poplar Hill and Red Gate Farm. To the southwest, down by the Ohio River, are the grand edifices of Osborne, Edgeworth and the village of Sewickley. I bet L. G. would have memorialized them if he had had room.

Wilpen Hall is an easy stretch-of-the-legs away, a simple matter of crossing property lines, but the “gentry” block me. 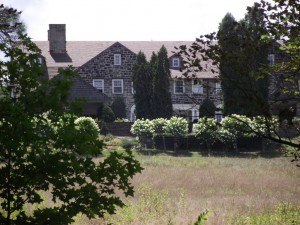 Turning away, I direct my thoughts toward Edgeworth again – an epiphanic movement, for suddenly I’m standing before Seven Gables, built in 1909 by John D. Culbertson. A reference to Nathaniel Hawthorne’s The House of the Seven Gables, which its narrator depicts as a “sculpted and ornamented pile of ostentatious deeds”? Culbertson must know he is revealing something of his nature. To any passerby familiar with the book, the home’s name is as effective as a “no soliciting” sign, which would be taboo here in any case, a social and zoning no-no.

The Hawthorniana does not end there. Edgeworth has Hawthorne, built in 1870 by William K. McClintock, and Hawthorn Ridge, built in 1934 by William B. Trainer (architect: Janssen and Cocken); and Pulpit Rock, built in 1901 by Samuel and Jeannette Walker (seven bedrooms, stables, billiard room, circa-1910 elevator, architect: Rutan and Russell). Was Colonial Revival Pulpit Rock christened after a site of the same name at Brook Farm in West Roxbury MA, the (short-lived) utopian experiment in which Hawthorne participated and on which he based his roman à clef The Blithedale Romance? None of the books with me are by Hawthorne. One wasn’t around in 1937, the Three Rivers Cookbook I, published in 1973 by the Child Health Association of Sewickley. Mrs. William Penn Snyder IV’s Pickled Shrimp, Mrs. B. F. Jones, III’s Salmon Mousse with Green Mayonnaise, Mrs. David B. Oliver II’s Omar Khayyam Dressing and Mrs. Henry Chalfant’s Broiled Shrimp Anafé are not waiting on a Chippendale console for me. As I see it, dear editor, I am being invited to make sense of the surrounding privileged utopia through the lens of Dark Romanticism. Next time I’ll bring along Hawthorne and the Social Register.

Invited? If I don’t step lively, I will sooner be the prey of pheasant shooters and fox hunters. The chase rather than the ball could begin any moment. The ball? Yes, at Mrs. Jones’s Fair Acres II. Weighing in at 50 rooms and 17 bathrooms, Fair Acres should be hard to miss.

L.G. guides me (uphill, SE, across private property) to Backbone Road, where I cannot resist Farm Hill (architect: William Ross Proctor, with additions by Hiss and Weekes and MacClure and Spahr). Mrs. Edith Oliver Rea’s 19 gardeners, preoccupied by Farm Hill’s nine greenhouses on 40 cultivated acres, lauded as one of the outstanding gardens of America in a 1928 issue of Country Life, look right through me. Her 60-foot waterfall, lily pond, scented garden of heliotrope and lavender and dairy barn inspired by Le Petit Trianon threaten to make me fashionably late for the ball. The portrait by Chartran of the lady of the Tudor Revival manor bestows a frown.

Like Mrs. Rea’s gardeners, golfers on holes 2, 3 and 4 look right through me. The only mortal on Quaker Hollow and Pony Hollow roads without a chauffeur, I reach the windows of Fair Acres II without sounding alarms in the police department beside the clubhouse. The ball is in full swing. No expense has been spared. The elaborate tableaux vivants are perfectly delightful. 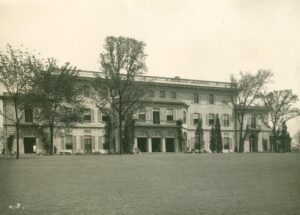 A sorrel hunter in profile in wooded undulating country beneath a cumulus sky and high mountain peaks; in the middle distance, on the shore of a river, members of a hunt and hounds at full cry. Elsewhere, two bird dogs point at a grouse hiding in wheat stacks as two men approach through a field of hay, houses visible in the far distance. Next is a Venetian canal, whose waters are dark and rippling and spanned in the distance by an arched bridge, leading to palaces outlined against an evening sky. After slinking to a different window, I see pollard willows reflected in the surface of a brook and a sloping green bank leading to a sunlit field. A nearby tableau is of a terra cotta wall and steps grown with vines bordering a long pool covered with pond lilies; in the background, evergreens and trees in spring foliage.

Still undetected, I go to a new window. Clasher, a brown hunter, stands in an open sloping field with low trees and hills in the distance. Clinker, a saddled chestnut hunter, can be seen in a straw-covered box stall beside a manger. Sweet William, a brown thoroughbred, poses in a flowering field enclosed in the middle distance by a fence and low gabled cottage, beyond are trees and castles in rolling, hilly country. A young woman in white Empire gown with dark hair tied with a blue bandeau is seated in a crimson chair, holding a child whom she supports on a pedestal and yellow cushion. Seven ladies, richly attired, are grouped upon a terrace before a wooded landscape, two playing musical instruments. Two golden-haired children, sisters, wear white frocks with broad blue sashes; facing me, the elder girl, broad-brimmed hat trimmed with blue and mauve ribbons, sketches with a pencil, her younger sister watching with absorbed interest. Another lady poses in a blue dress cut low with a bow at the center of a corsage, white chemisette, blue ribbon neckband, blue and gold earrings; her dark brown hair is brushed up from the forehead. A young man, seated against a gray background and wearing a dark-gray doublet with slashed sleeves embroidered in silver and broad white linen collar falling over the shoulders with tassel-tie, looks at me with a humorous expression, lips slightly parted. Another gentleman is seated in scarlet coat embroidered with gold, with blue collar and cuffs and white wrist bands, black breeches with gold buckles, and white stocking; his right elbow rests on a parapet, his right hand is raised to his cheek, his left hand holds a paper inscribed with Persian characters, on a table rests his sword, behind him are columns and sky.

The “lower classes” are represented in rooms by the service entrance. A peasant woman, six children and a thatched cottage in a setting of overhanging trees, the gnarled and almost leafless branches of one stretching across the roof; to the left, a cascading stream and footbridge, and through an opening, a field with trees in blue-green foliage and clouds tinted with the rays of a setting sun. A group of nomads are gathered around a tripod fire and kettle in the shade of a tree; the central figure is a barefooted young woman in a red cloak, nursing an infant; in the distance, a church tower. Two sows and a litter of pigs feed from a trough, in which a peasant girl has poured food; a cottage and stable door in the background. Jack Hill, a handsome rustic boy with long curling brown hair, wears a brown coat and white shirt open at the neck; in both hands, he holds a bird’s nest, its eggs taken from the tree on the right, at which he is looking; to the left, a landscape and vista of low hills. Finally, four Native Americans before teepees in a clearing, a fifth leads a white horse; the scene is enclosed by the dark foliage of trees outlined against a golden twilight sky.

The social classes mix too. After nearly circling rectangular Fair Acres II, I glimpse a young woman in pink coat and white gown with a blue sash, her straw hat has a blue ribbon; weeping, she walks toward a tree, behind which a youth in forester’s dress watches her; to their right, a cottage doorway and an old peasant couple.

The belles of the ball are perfectly charming. Throwing my voice, I announce them and their painter “chaperones” as if the butler has done it.

The stuffiness of Sewickley Heights is becoming oppressive.

Your faithful correspondent shall take a brisk walk to Old Economy, founded in 1824 by The Harmony Society.

Old Economy is past Camp Meeting Road toward L. G.’s horse cartouche in the NW corner of his map.

A Surveyor of the Customs

acknowledgment
The descriptions of the tableaux vivants were taken from The Eminent Collection of Paintings formed by the late Mrs. B. F. Jones, Jr., Sewickley Heights, Pa. (1941), Parke-Bernet Galleries, Inc., New York 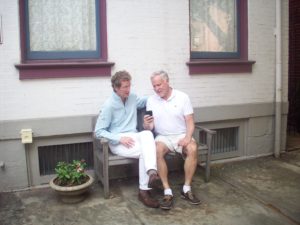 Dedicated to Mike May, former editor of the Sewickley Herald