Who signed for a meteor rejector? 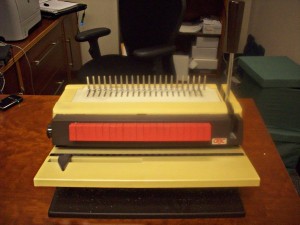 Bulletin: Because the meteor rejector may eventually save the planet, the Board has decided to keep it.

The new possession is unlikely to draw the attention of defense departments around the world until annihilation comes knocking, so its presence should not interfere with normal operations. Non-member earthlings will no doubt rely on us to rescue them in an emergency (sigh), given that virtual entities like ours can, with minor technical adjustments, exist without them; a defense treaty with them would be a lucrative income stream.

Accordingly to the manual (yes, it came with a manual!), the device, which requires only routine dusting and an AC power supply (NEMA 1-15 socket), can crush meteors into buñuelo-sized pieces, then sculpt them into golf balls (dimples too!). Important qualifier: The manual does not contain supporting data obtained in a testing environment.

The Club may solicit an appraisal of the meteor rejector on the Public Broadcasting Service’s “Antiques Roadshow.”