Today’s stop on the Walter Mitty Champions Tour is Balboa Park in sunny San Diego. The original course was built in 1915. William P. Bell, prominent during the “Golden Age” of golf course architecture in America, placed his stamp on it in 1921. The U.S. government photographed it from the air in 1949 and 1953. A redesign in 1995 was by Halsey Daray Corp. of San Diego.

The sea of well wishers gathered for the San Diego stop on the Walter Mitty Champions Tour parts for the underdog, whose body language speaks of hitting fairways and making birdies. The weighty words “victory” and “champion” unfurl in the imagination as if written by dueling sky pilots. Yet they are left unspoken – for now. The underdog’s unwavering, Pacific blue peepers tell all present that the pressure-packed importance of the occasion makes no impression on him. He steps forward into the charmed square of the tee box.

The world’s greatest ball (according to its manufacturer) is launched.

Under the pressure of competition, the underdog is searching his pockets and golf bag.

The truth is, 2 gives me as much trouble as the widely feared 4 and 16.

The underdog’s admission of fallibility elicits respectful nods from some in the crowd. Others share looks of concern, their new favorite having revealed a chink in his armor. The underdog addresses the ball.

The chaparral on the hillside collects another victim.

What quoth the crow?

On the march, the combatants and their entourages pass below the clubhouse on the bluff. One question gnaws at many souls: Should this golden opportunity to grow old and die in the Club Grille be seized? Yet not one soul peels off. Mitty Tour officials scouting advance positions bark orders. Armies of the faithful encamp around approaches to the green.

Is that a knife in his hand? What is he doing with a knife?

Ladies and gentlemen, the underdog has a knife! Everybody, please remain calm!

When your scorecard pencil has lost its point, pioneer ingenuity kicks in. You whittle.

The broad fairway at the underdog’s feet resembles a country meadow or pretentious lawn. Enough is hidden of the structure crowning the opposite slope for it to be mistaken for a poet’s cottage or a fat cat’s castle. The underdog selects the meadow, the cottage and his 3-wood.

The raised greens of 4 and 5 have loomed over generations of golfers. The smart money is against the underdog. As whisperings in the gallery foretell disaster, he and his clubs suffer communication breakdown. The soaring walls protecting the holes repulse like flies his ineffectually lofted shots. Multiple duffs force him to criss-cross hill and dale (he is compared unfavorably to a mountain goat!) in pursuit of the enemy (the golf ball). On top of it all, sweat smudges the ink of the grocery list; the flavor of the golf widow’s favorite muffin is now illegible. The underdog is at rock bottom.

The eyes of the world are elsewhere as the underdog executes a blind carry over a thick stand of trees.

See, it didn’t sail out of bounds into the windshield of a parked car! After such good fortune, I feel awful that my dog used to run here off leash at night. Wasn’t thinking in golf terms then. Hope his business became fertilizer, not a nuisance in somebody’s cleats.

The tee is back there somewhere. How did I get here?

The parvenu got this far with that putter? It could pass for a toy.

No daydreaming…Admiring the design of the green and bunkers slows play…If I didn’t hit into eucalyptus trees, I could the oceanviews…

Quit talking to yourself and play!

In defiance of distractions, the wannabe conqueror –

“The Pacific blue of his peepers…” murmurs a groupie suffering pangs of unrequited love.

…surveying the picturesque distance, swings for the flag short of the Coronado Islands and the sign reading “El Cortez” on a skyline roof. 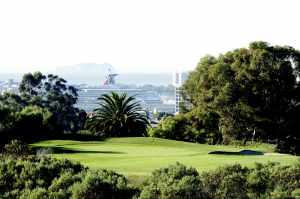 “I’ve got him now!” says a rattler waiting out of bounds left of the fairway.

“I’ve got him now!” says the narrow approach to the green.

In the gathering twilight, the underdog lines up his long putt. His fans, worry written all over their faces, stand side-by-side at a safe distance, like a squad of executioners. His caddie holds the flag. With the gallery cameras raised, pointed and aimed at him, the underdog appears immersed in thought.

If the golf widow – and Mom! – could see me now, and not bring up grocery lists…

The coup de grace is on its way!