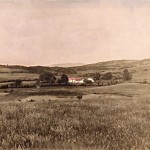 A self-reflexive peek behind the curtain. The Golf Widow in action:

The extreme clarity of the desert light is equaled by the extreme individuation of desert life-forms.

The reverie toward childhood allows us a condensation, in one single place, of the ubiquity of the dearest memories. This condensation adds the house of the beloved to the house of the father, as if all those whom we have loved were, at the summit of our age, supposed to live together, remain together.

Gaston Bachelard, The Poetics of Reverie: Childhood, Language, and the Cosmos (1960)

I want to actively add myself to something that’s beautiful but that I lack, that I require.

Roland Barthes, The Preparation of the Novel (1977)

Suppose that the intellectual’s (or the writer’s) historical function, today, is to maintain and to emphasize the decomposition of bourgeois consciousness. Then the image must retain all its precision; this means that we deliberately pretend to remain within this consciousness and that we will proceed to dismantle it, to weaken it, to break it down on the spot, as we would do with a lump of sugar by steeping it in water…by decomposing, I agree to accompany such decomposition, to decompose myself as well, in the process: I scrape, catch, and drag.

a) those that belong to the emperor; (b) embalmed ones; (c) those that are trained; (d) suckling pigs; (e) mermaids; (f) fabulous ones; (g) stray dogs; (h) those that are included in this classification; (i) those that tremble as if they were mad; (j) innumerable ones; (k) those drawn with a very fine camel’s-hair brush; (l) etcetera; (m) those that have just broken the flower vase; (n) those that at a distance resemble flies.

Alles hängt von der Entscheidung ab, ob wir die Chronisten oder die Erfinder unseres Lebens sein werden. (Everything depends upon the decision whether we will be the chronologists or the discoverers of our life.)

…conditional laws would cease to be laws of hospitality if they were not guided, given inspiration, given aspiration, required, even, by the law of unconditional hospitality. These two regimes of law, of the law and the laws, are thus both contradictory, antinomic, and inseparable. They both imply and exclude each other, simultaneously. They incorporate one another at the moment of excluding one another, they are dissociated at the moment of enveloping one another, at the moment (simultaneity with simultaneity, instant of impossible synchrony, moment without moment) when, exhibiting themselves to each other, one to the others, the others to the other, they show they are both more and less hospitable, hospitable and inhospitable, hospitable inasmuch as inhospitable.

Your life will be safer and much less exciting than you ever dreamed possible.

We have cut down trees and are building a berm along the road on three sides of the new Lido course, because a berm will deflect sound upwards from the road, where the trees would only have been a visual barrier. In Bandon, we did discuss the possibility of building a green lower to the ocean, and it was noted that getting the sound of the surf would be a positive addition, but in the end you would take advantage of such opportunities for other reasons first. I would not be surprised if the landscape architects who worked on Tom Fazio’s high-end courses did things to amplify the sound of the babbling water features they built…When I first joined Crystal Downs, you could pick and eat wild strawberries out of the rough in June, and you can still pick blackberries and raspberries in spots, and eat the apples off the old orchard trees in the fall. Now, alas, the strawberries have been eradicated in the process of making the rough more “fair”. But I do think that such natural opportunities are far more appealing than the soup stations on Discovery Land golf courses, and I guess I should think more about trying to add in some opportunities where previous landowners have not provided them.

Probably the best thing I’ve done on the environmental front in the past couple of years was to figure out a way to capture some of the runoff from the Memorial Park Golf Course so that it could be re-used for irrigation. This saved them from using 60 million gallons of municipal water last year. Honestly, I never would have thought about doing that had the Memorial Park Conservancy not set the goal in their guidelines for the park. Previously they were just trying to get the golf course to drain as fast as possible, which meant sending all that water straight into the bayou, to the point that it contributed to downtown flooding during hurricanes. They made us think about it. Making it work did NOT include miles and miles of underground pipe; it just involved diverting the runoff into a couple of swales that could be dammed up to catch the water, and then pumping from there to a much larger irrigation pond with steep banks that have plenty of freeboard for additional storage about the normal lake level. It’s not my favorite look, but it worked: all of that infrastructure is built into the finishing holes of the course, and nobody seemed to notice last year.

There’s nothing left to play for but a gold-plated helicopter.

…intermedial performances may, through staging the media in a context in which they do not normally appear, offer the opportunity to intervene critically in the flow of media…encouraging more active and critical spectatorship.

Greg Giesekam, Staging the Screen: The Use of Film and Video in Theatre (2007)

Exegi monumentum aere perennius. (I have erected a monument more durable than bronze.)

To speak of “humans” and “nonhumans” allows only a rough approximation that still borrows from modern philosophy the stupefying idea that there exist humans and nonhumans, whereas there are only trajectories and dispatches, paths and trails.

One could always choose not to keep score, but at the cost of rendering oneself invisible.

If he should ever have to plead before a bench, he would employ not the sentences calculated to convince his judges, but such Bergottesque sentences as his peculiar literary temperament suggested to him and made him find pleasure in using.

Marcel Proust, Remembrance of Things Past (1913)

This past, too, has no reality beyond the moment it is evoked with sufficient force; and when it finally triumphs, it has merely become the present, as if it had never ceased to be so.

A place name is a few words piled up to mark a spot, draw attention to it, differentiate it from the unmarked; a few stones that fall down after some generations, perhaps for someone to pile them up again, into a different shape.

Tim Robinson, Listening to the Landscape (1994)

That Thursday in early April my learned friend Martial Canterel had invited me, along with several other close friends of his, to visit the huge park surrounding his beautiful villa at Montmorency.

Locus Solus, as the property is called, is a quiet retreat where Canterel enjoys the pursuit of his various fertile labours with a perfectly tranquil mind. In this solitary place he is adequately sheltered from the turmoil of Paris – and is yet able to reach the capital within a quarter of an hour whenever his research requires a session in some specialist library or when the moment comes for him to make some sensational announcement to the scientific world at a prodigiously packed lecture.

Canterel spends almost the entire year at Locus Solus, surrounded by disciples full of passionate admiration for his continual discoveries, who lend their enthusiastic support to the completion of his work. The villa contains several rooms fitted out as luxurious model laboratories, run by numerous assistants. Here the professor devotes his entire life to science – for he is a bachelor with no commitments whose large fortune at once removes any material difficulties incurred by the various targets he sets himself, in the course of his strenuous labours.

The bus passed over the first monument. I pulled the buzzer-cord and got off at the corner of Union Avenue and River Drive. The monument was a bridge over the Passaic River that connected Bergen County with Passaic County. Noon-day sunshine cinema-ized the site, turning the bridge and the river into an over-exposed picture. Photographing it with my Instamatic 400 was like photographing a photograph. The sun became a monstrous light-bulb that projected a detached series of “stills” through my Instamatic into my eye. When I walked on the bridge, it was as though I was walking on an enormous photograph that was made of wood and steel, and underneath the river existed as an enormous movie film that showed nothing but a continuous blank.

The steel road that passed over the water was in part an open grating flanked by wooden sidewalks, held up by a heavy set of beams, while above, a ramshackle network hung in the air. A rusty sign glared in the sharp atmosphere, making it hard to read. A date flashed in the sunshine…1899…No…1896…maybe (at the bottom of the rust and glare was the name Dean & Westbrook Contractors, N.Y.). I was completely controlled by the Instamatic (or what the rationalists call a camera). The glassy air of New Jersey defined the structural parts of the monument as I took snapshot after snapshot. A barge seemed fixed to the surface of the water as it came toward the bridge, and caused the bridge-keeper to close the gates. From the banks of the Passaic I watched the bridge rotate on a central axis in order to allow an inert rectangular shape to pass with its unknown cargo. The Passaic (West) end of the bridge rotated south, while the Rutherford (East) end of the bridge rotated north; such rotations suggested the limited movements of an outmoded world. “North” and “South” hung over the static river in a bi-polar manner. One could refer to this bridge as the “Monument of Dislocated Directions.”

Robert Smithson, A Tour of the Monuments of Passaic, New Jersey (1967)

The walker in familiar fields which stretch around my native town sometimes finds himself in another land than is described in their owners’ deeds, as it were in some far-away field on the confines of the actual Concord, where her jurisdiction ceases, and the idea which the word Concord suggests ceases to be suggested. These farms which I have myself surveyed, these bounds which I have set up, appear dimly still as through a mist; but they have no chemistry to fix them; they fade from the surface of the glass; and the picture which the painter painted stands out dimly from beneath.

I wanted to be an Art Businessman or a Business Artist.

Andy Warhol, The Philosophy of Andy Warhol (From A to B and Back Again) (1975)

I have never managed to handle the guilt. In the act and the course of writing stories, these are two of the springs, one bright, one dark, that feed the stream.