Seven palms stand between me and the way of all flesh. One of the ill-fated stars of the following scribblings lies beside me, six feet under. His fame may ensure that our story lives on, wherever our souls may be.

One sunny desert day—shortly after the Pacific Ocean made a seismic meal of California, leaving half to mainland US of A—some survivors of the calamity crawled, hot and bothered, into Borrego Springs. Never ones to learn a lesson, the know-it-alls, already sentimental about the Good Old Days, could think of nothing better to do than resume their failed ways. One bright bulb, stumbling on the ruins of the Hoberg’s Desert Resort, has a Eureka! moment. 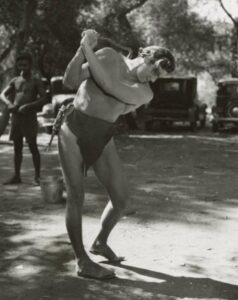 Built in 1947 on 20 acres, Hoberg’s was a getaway for Hollywood stars, who rubbed elbows and other body parts at its landing strip, Olympic-size swimming pool, cocktail lounge, restaurant and bungalow retreats, until the resort burned down in 1958. One of the current refugees still listens to songs of the 50s (he is as corny as they come). Let’s call him (pronounced “Bing”). begins to croon about having a “Clambake.”

Heck, a “Clambake”? In 1937, singer Bing Crosby, big cheese and golf nut, conjured up a golf tournament for his pals near his home in coastal San Diego. In 1947, he moved the damned thing, dubbed the “Clambake,” to the Monterey Peninsula. This is the flimsy pretext for our Borrego Springs to have its own Clambake, forget about the distance of the ocean. For cryin’ out loud, post-apocalyptic humans are as resourceful as any 20th century dopes.

The hot mess is personal too because the unaccountably cheerful barbarians are my peeps. I am up to my elbows in Clambake with every darn Tarzan and their significant others. Some have walked rather than crawled into town. Others hobbled. The luckiest rode bikes or were pulled in wagons. (Gasoline is unobtainable; abandoned cars and trucks line every road, their tinted windows hiding any skeletons within.) Stained sports jerseys, baseball caps and little else protect from the elements as a welcoming committee of coyotes, snakes, hawks and roadrunners makes a mental note of the new neighbors. The homeless attendees at the first community soup line mix and mingle, civilly at first, without name tags (office products are in short supply).

Six Palms
A measure of the scale of the disaster: A record collection was abandoned! It may have belonged to a Hoberg employee. Although circumstances prevent spinning vinyl, and most of the sleeves are empty anyway, the cover art gets in our heads, planting ideas for a sorta new world. One genre represented plentifully is 1950s and 60s West Coast jazz—think Mucho Calor (Much Heat), Lighthouse at Laguna, West Coasting, Fire in the West, Shifting Winds, Dizzy Atmosphere and Way Out West–think bikinis, sand, surf, bongo drums, fedoras and beach umbrellas framed by loud fonts—think warm colors. has to be heard too, of course. A decent singer, he resents the absence of vocals. What and see in the ham beyond his voice is beyond me. Fortunately for him, Europe is represented too, albeit by very particular tastes. Schoenberg subsists beside Swiss-German children’s music. Without a turntable, we have to be resourceful. masters Wolf Biermann’s Aah-Ja! (1974), if you call mastery the maddening (to me) repetition of an album’s title track. We have no currency yet, so his voice does not bring monetary rewards, which eats at him.