Welcome, thanks for being here. Why “green room”? Once upon a time, stage makeup was green in color before setting. Anxious actors have “green” faces. Inexperienced and/or nervous actors are “green.” Many theatricals at Versailles were held outdoors in “bosquets” (groves), effectively “green rooms.” Medieval plays were often performed outdoors on the village green; an adjoining space for preparation and waiting was a “green room.” Green is also associated with safety, permission, nature, inexperience, calm, jealousy/envy, the dollar. 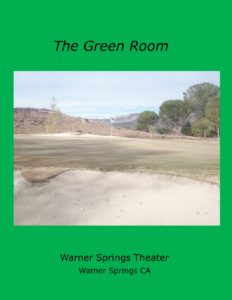 The stage, a golf course in rural Warner Springs CA, is dark. The Old Man invokes a spirit of the past, his past as a and a . With him on his odyssey to a wilderness is the Golf Widow, who, on an as-needed basis, whispers his scripts to him via a wireless, in-ear device.

After the is finished, he gives up the balance of his time to his doppelgänger, the , for a collaboration with the Golf Widow on a read-through of Hamlet Postmortem, the ‘s response to his transformative theater experience, The Wooster Group’s Hamlet, which the British Library has ranked one of the 10 key performances of Shakespeare, ever. Hamlet Postmortem takes place in the natural amphitheater of a green, which won’t be damaged because the performance is disembodied.

On the Old Man’s back is written:

I am the boy / That can enjoy / Invisibility

On his scorecard pencil:

Newly imprinted and enlarged to almost as much againe as it was, according to the true and perfect Coppie.

. My earliest theater memories begin in New York City with Shakespeare. I was 12 in 1972 for Two Gentlemen of Verona on Broadway as a rock musical. 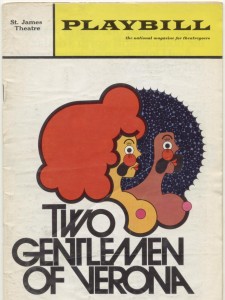 Golf Widow. What do you remember about it?

. The balcony of a large, dark theater. The distant light of the stage. I was naïve enough to be unintimidated by the Big Apple, thanks to a solid production team comprised of my mother, aunt and grandmother. The family, without my father, would visit Aunt Ruth, a speech therapist and aspiring actress, on Manhattan’s Upper West Side. The “sets” there were interchangeable – one minute defined by the concreteness of the City That Never Sleeps, not excluding the playground at the foot of her apartment building – the next minute by the lawns of Central Park. Aunt Ruth’s wood parquet floor, theater posters, plays, soundtracks of musicals, and books about actors and art formed a restorative “green room” before and after excursions. But I’m getting ahead of myself. Though I was green on New York’s mean streets – and in its mean theaters – a green light flickered within.

. A Midsummer’s Night Dream or Romeo and Juliet or both in Miss Stroyd’s high school English class.

Golf Widow. What do you remember about them?

. They did not embolden me to join the drama club, which was not recognized by my peer group, which valued sports, the conventional road to status.

Golf Widow. What about Hamlet?

. Around the same time I read it on my own. It was beyond me, and I was too insecure to seek out a teacher who would make it intelligible. Around 1980 I saw the 1948 film with Laurence Olivier, which helped.

. “…re-imagined by mixing and repurposing Richard Burton’s 1964 Broadway production, directed by John Gielgud. The Burton production was recorded in live performance from 17 camera angles and edited into a film that was shown as a special event for only two days in nearly 1,000 movie houses across the U.S. The idea of bringing a live theater experience to thousands of simultaneous viewers in different cities was trumpeted as a new form called ‘Theatrofilm,’ made possible through ‘the miracle of Electronovision.’ The Wooster Group attempts to reverse the process, reconstructing a hypothetical theater piece from the fragmentary evidence of the edited film. We channel the ghost of the legendary 1964 performance, descending into a kind of madness, intentionally replacing our own spirit with the spirit of another.”

Golf Widow. After becoming a Wooster groupie, you gave up writing plays, right?

Golf Widow. Tee it up.

5
Rotten in the State I: Sewickley

6
The Players I: Fellows

10
Mousetrap/Dumbshow II: The Unauthorized Autobiography of King Lear, or King Lear, the Kidz and the Kar Keys

11
Mousetrap/Dumbshow III: Play in the Dark

Here we have the old man talking to the young with the dead in between. John Gielgud

The audience for Shakespeare is dead. For posterity, two theater directors, John Gielgud and Elizabeth LeCompte, record a read-through in unison of their Hamlet prompt-scripts.